Will You Let God Set You Free!?

The Power to Break the Chain of Lies so you can be FREE“ Am I therefore become your enemy, because I tell you the truth?” Gal. 4:16! This page belongs to Minister Clarence F. Sargent

Part 2- Knowing what freedom is and how to receive it!

THE PRINCIPLES OF FREEDOM
As we learned yesterday Freedom is far more than what we learned in school, and a lot deeper of a subject than most Americans know. But the point in doing this series is not to teach what we know but what we haven’t understood about freedom, so that we can grow-up into it and change the world.
Conditions that surround you will determine your responses until it is interrupted by the greatest outside force available…God himself! The issue is….we cannot walk in true freedom UNTIL we accept the responsibility required to use it rightly. The problems created by a non-understanding of biblical freedom are obvious, we know that we are released from Satan the Oppressor at the http://rcm.amazon.com/e/cm?t=theope-20&o=1&p=8&l=bpl&asins=B001HL0DZS&fc1=000000&IS2=1&lt1=_blank&m=amazon&lc1=0000FF&bc1=000000&bg1=FFFFFF&f=ifrNew Birth, but we think we are still bound to the oppression as a religious obligation. This would not happen if we were taught to be responsible for our own freedom.
The good news is that Jesus WILL convert our deliverance from sin INTO freedom FROM sin through our sanctification process. The longer we live as responsible believers under God’s Laws and commands the deeper that word creates within us a solid foundation that the winds, and waves of the world cannot knock down!
Our position in life does not guarantee our disposition, emotions cannot be trusted to follow as a sign like so many do in Horoscopes, and the craft. Simply because something is new does not mean that CHANGE is happening! Too often we as Christians base our lives around superstitions rather than the Word of God and our freedom turn into bondage.
Without a real MENTAL transformation, a renewing of our thinking, the actions we take to change will only produce a new place to do the old things we used to do. Decorating garbage only leads to a smelly mess that looks nice but goes no where in changing our insides as God requires.

God calls this form of religion Hypocritical!
http://rcm.amazon.com/e/cm?t=theope-20&o=1&p=8&l=bpl&asins=0830819878&fc1=000000&IS2=1&lt1=_blank&m=amazon&lc1=0000FF&bc1=000000&bg1=FFFFFF&f=ifrWhy do people LIKE being controlled by others rather than being free to be controlled by God? The answer is simple really,there is comfort in having someone else take control of your life so you can slide through without having to take responsibility for your own actions. This is why the progressive party uses Welfare so well to control elections, people would give up their rights as long as those food stamps are available. But if we are in obedience to God its our responsibility to walk out of the prison we made not God!
Want to know who changes YOU? You do! God provides all the power and the faith but YOU have to want to do the actions required to be free, you’ve heard the phrase ‘Freedom isn’t Free’ well its true in more ways than you know. Your thinking must line up with God’s plan for you before that plan can be fulfilled, if the old ways are in play the New ways will be silenced. Playing games that you played as a sinner will only imprison your walk with God.
If we truly love God AS WE SAY then DOING his word should be second nature, without exception. NOTHING CHANGES UNTIL THE SOUL CHANGES, your wasting your time playing religious games, they avail nothing and prove nothing to God.

“But be doers of the Word [obey the message], and not merely listeners to it, betraying http://rcm.amazon.com/e/cm?t=theope-20&o=1&p=8&l=bpl&asins=B000VZQXCI&fc1=000000&IS2=1&lt1=_blank&m=amazon&lc1=0000FF&bc1=000000&bg1=FFFFFF&f=ifryourselves [into deception by reasoning contrary to the Truth]. For if anyone only listens to the Word without obeying it and being a doer of it, he is like a man who looks carefully at his [own] natural face in a mirror; For he thoughtfully observes himself, and then goes off and promptly forgets what he was like. “

Its simple…What we feed our minds, like our bodies determines how healthy we will be, too often we think of our minds as the last thing a christian should be worried about, but your mind should be the FIRST THING YOU ARE CONCERNED ABOUT since that is where the battle of flesh and spirit takes place. Your mind will determine your quality of life and the degree of FREEDOM you enjoy with God.

RETRAIN your mind to think like God….How do you do that? By meditating not simply reading God’s word first of all and by praying his word into your soul. This is what the bible means by saying to be in prayer at ALL TIMES because talking to God should be returning his word to him once it is processed in our hearts and received as fact to our minds, this is true prayer.

http://rcm.amazon.com/e/cm?t=theope-20&o=1&p=8&l=bpl&asins=0852346042&fc1=000000&IS2=1&lt1=_blank&m=amazon&lc1=0000FF&bc1=000000&bg1=FFFFFF&f=ifrYou must become mature and be willing to fight, take responsibility for your own future by bearing fruit though the kingdom of God within you. If you claim to be Christian then you CANNOT at the same time be religious, ether you are his or you are not! Never forget that its easier to live as a slave until you decide that you want to be in control with God’s help then the real struggle begins! 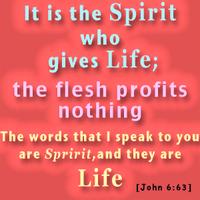 Freedom isn’t free, neither is it ongoing without work..HARD WORK, because the lack of responsibility in others can bring you down to their level as quickly as you rose up. Don’t hang around those who do not share in your freedom as their lack of work will become yours in short order! Don’t get so busy getting over your past that you forget to build for your future.

Don’t be one of those Christian fakes that are so glad for being free from Satan in Word only, http://rcm.amazon.com/e/cm?t=theope-20&o=1&p=8&l=bpl&asins=B004K1FHBW&fc1=000000&IS2=1&lt1=_blank&m=amazon&lc1=0000FF&bc1=000000&bg1=FFFFFF&f=ifrbut all the while do not want real deliverance from their oppression because it comforts them to remain where they were rather than work hard to be as God wants them. These people are no better in God’s eyes than the thousands of Welfare bums in America who rather than working to get a job would just as soon be on endless taxpayer support because its easier than risking ones energy to do it for themselves. Don’t be a fake, be real before God because he was real to gain the rights to your freedom for you!

Spiritual Refining: The Anatomy of True and False Conversion

Knowing the Heart: Jonathan Edwards on True and False Conversion

The Way of the Master: True & False Conversion and Soundly Saved (How to share your faith simply, effectively, biblically…the way Jesus did, 2 Audio Message Set)

A link too many: A tract on true and false conversion and assurance

I am a FULL GOSPEL MINISTER an Ex-Black Witch and Substance abuser brought to Faith in Jesus Christ in 1979. I believe that the Bible teaches that ALL BELIEVERS SHOULD PROSPER JUST AS THEIR SOULS PROSPER IN THE WORD OF GOD! Jos 1:8-9 "This book of the law shall not depart out of thy mouth; but thou shalt meditate therein day and night, that thou mayest observe to do according to all that is written therein: for then thou shalt make thy way prosperous, and then thou shalt have good success. Have not I commanded thee? Be strong and of a good courage; be not afraid, neither be thou dismayed: for the LORD thy God is with thee whithersoever thou goest." 3Jn 1:2 "Beloved, I wish above all things that thou mayest prosper and be in health, even as thy soul prospereth." These are my personal post writings in which I give you what's on my heart. I do not apologize for what I think in any way, I am an Historicist in my prophetic interpretations of prophetic events in history and Pro-Life as far as my views on Abortion......in this I am proud and strong. I am a business man doing Affiliate marketing and CONTRARY to some DO EARN A LIVING AT IT with a clear conscience and clean heart, nothing ..NOTHING I promote is a scam, that's a promise!

go to my Odiogo Page and click Subscribe so you can listen to my content on the go on your iPod or MP3 player. I hope my readers will love this!

GOOD THINGS TO SAY ABOUT THE USA
The Good USA Foundation is dedicated to countering all the negative and ant-American publicity in the world. We are soliciting essqays, stories, poems, etc. from ordinary people - native born Americans, immigrants and even residents of other countries

Check these links out!

Too Many Passwords? Here’s the Best Help!

Error: Twitter did not respond. Please wait a few minutes and refresh this page.

RSS Feed for this blog

Increase your Faith : Read about it!

Find something Interesting..click on it!

Nothing but the Facts! Truth Blogs!